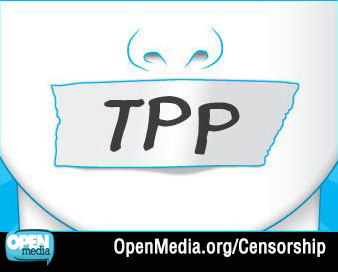 Decision-makers around the world have had it with secrecy around the Trans-Pacific Partnership (TPP) negotiations - and they're taking a stand.

As TPP negotiations are set to resume this month, let's keep making our voice heard against the TPP's Internet censorship plan at https://OpenMedia.org/Censorship

Senior legislators from Australia, Canada, Japan, Malaysia, Mexico, New Zealand and Peru today issued a joint letter seeking the release of the text of the Trans-Pacific Partnership Agreement (TPP) before it is signed, to enable detailed scrutiny and public debate. The signatories include political party leaders and legislators who currently or previously held senior political office in their national governments.
In 2009 the parties to the negotiations agreed that the text for the agreement would not be released until the negotiations are concluded, and all documents other than the text will be held in confidence until four years after the agreement comes into force, or the last round of negotiations if the agreement is not concluded.
The joint letter of legislators states:
"We, the undersigned legislators from countries involved in the negotiation of the Trans-Pacific Partnership Agreement, call on the parties to the negotiation to publish the draft text of the agreement before any final agreement is signed with sufficient time to enable effective legislative scrutiny and public debate."
Read more at tppmpsfortransparency.org
SHARE ON TWITTER SHARE ON FACEBOOK