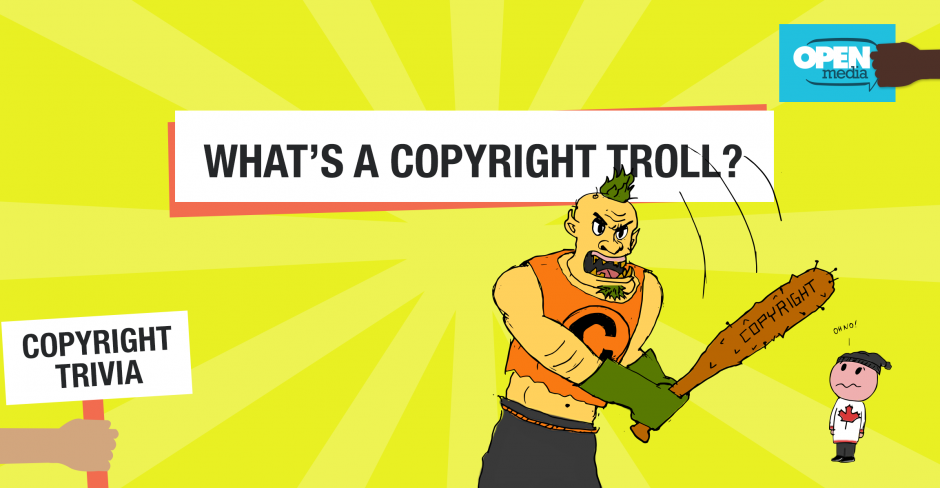 An entire industry that profits off suing people for copyright infringement? Meet the “copyright trolls”.

The term copyright troll is usually used to denote a person or group whose business model is to profit from suing people for allegedly infringing on the copyright licenses they own. A copyright troll’s revenue might come from payment for damages incurred as a consequence of the copyright infringement, or more often than not from quick settlements paid by people (e.g. bloggers, web services, movie streamers/downloaders) who are frightened into settling out of court to avoid further litigation costs.

For example, in 2010 EFF helped in the litigation initiated by alleged “copyright troll”, Righthaven:

Righthaven, founded in March of 2010, files hundreds of copyright infringement lawsuits on behalf of newspaper publishers against bloggers who make use of news content without permission. To that end, Righthaven searches the internet for stories and parts of stories from the newspapers that they represent. Once they find content that has been re-published, Righthaven purchases the copyright to the article and sues the owner of the blog. (EFF)

Another example of copyright trolls’ tactics is to partner up with studios that produced movies that flopped at the box office, to then go after people who pirate them online and push them to pay for a settlement to avoid litigation. According to EFF, copyright trolls employ “dragnet” tactics, targeting potential infringers en masse:  “since profitable copyright trolling depends on targeting thousands of Internet users, trolls have an incentive not to investigate their claims carefully before filing suit.”

This year, Canada had its own high-profile copyright troll case when Voltage Pictures attempted a “reverse class action” lawsuit. Voltage tried to force Rogers to hand over the personal information attached to an IP address suspected of downloading one of Voltage Picture’s movies without permission —the plan, according to iPolitics, was to first request the disclosure of a customer’s identity to then add several more requests to the lawsuit. As outlined above, this is a known move by companies seeking to intimidate Internet users and profit from out-of-court settlements.

In good news, the government of Canada just decided to ban settlement demands through its notice-and-notice system. As professor Michael Geist noted, this means that “ISPs will not be required to forward notices that include settlement of payment demands.” This is surely a step forward in making sure copyright trolls do not bully Internet users into paying out-of-court settlement fees for behaviour trolls often don't even have evidence to prove occurred.

Copyright touches everything around us – and right now the government is running a consultation to decide the future of Copyright in Canada.

Make sure to learn more and make your voice heard at letstalkcopyright.ca

Special thanks to folks at CIPPIC for their feedback on this copyright trivia series.