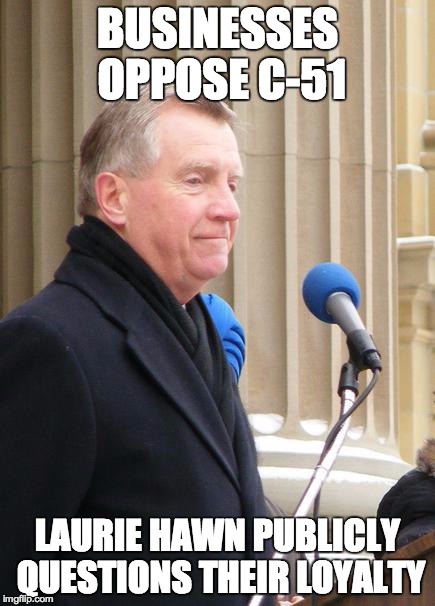 Wow -- this is how Conservative MP Laurie Hawn responded to the now 140+ businesses who have raised concerns in a letter published by the National Post about reckless spying Bill C-51:"[They] should seriously reconsider their business model and their lack of commitment to the values that bind us as Canadians". Keep in mind that the list of signatories includes the founder of the largest software company in Canada. In fact the list of signatories runs the gamut from local bakeries, to property developers, to venture capitalists.  It’s amazingly unbecoming of a public office holder like Laurie Hawn to question the loyalty to Canada of these business people from across the country.

Many many more are listed here: http://StopC51.ca/business

I could be wrong but my sense is that these business leaders were not looking for business advice from a politician.  I suspect they also do not like having their values and loyalty called into question nor the insinuation that they are “profiting” off of “horrific material”.

The arrogance and elitism displayed by Mr. Hawn and his colleagues towards the business sector is really abhorrent. And scary given the extreme new spying powers they are in the process of giving themselves.

For the record, the concerns raised by these business leaders are echoed by former prime ministers (from both the Conservatives and Liberals), retired Supreme Court judges, security experts, spy watchdogs, best selling authors, the government’s own privacy commissioners, Conservative voters, and the vast majority of Canadians.

It really does appear the Conservatives have been in power so long that they’ve truly lost touch.