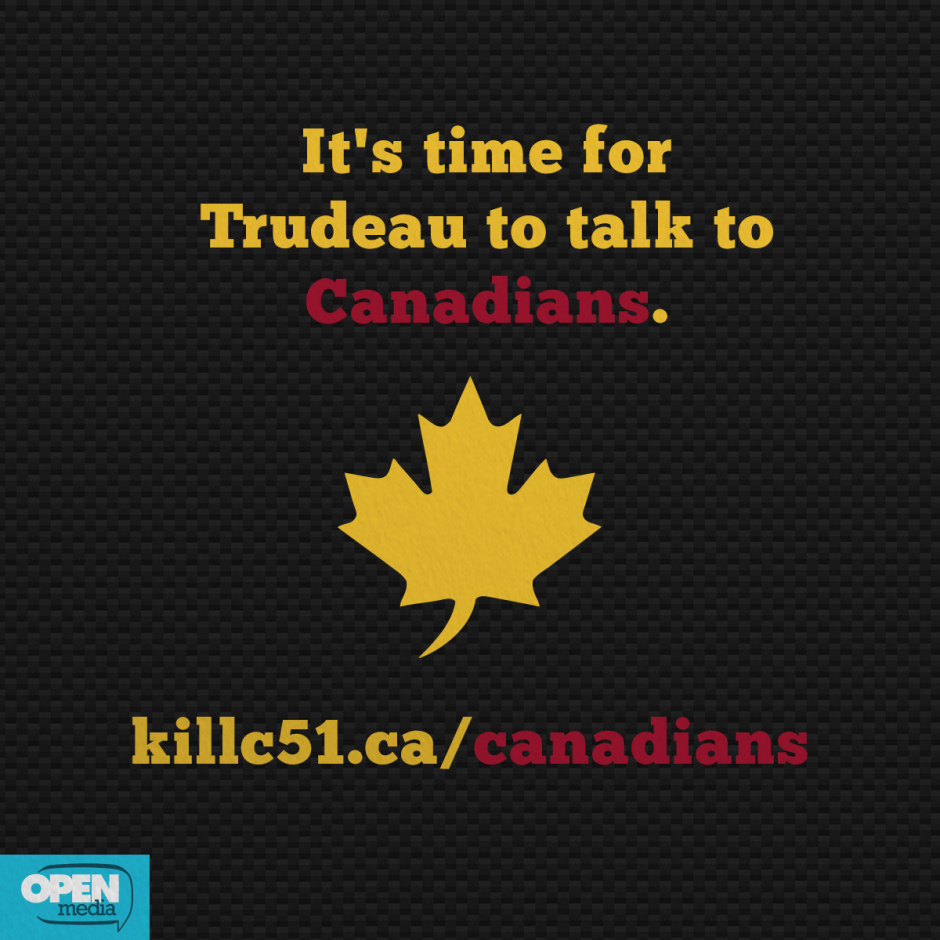 The recent attacks in Paris, Beirut, and Mali have left the world shaken. Here at OpenMedia, as elsewhere, it’s been an emotional time, as we worry about our friends overseas going through tragedy and adversity. However, we have also grown increasingly concerned by the escalating rhetoric of fear that is being used to justify invasive surveillance mechanisms in response. Fear is an emotion that dictates extreme, and reactionary policies and actions that we later come to regret. We cannot be governed by fear, and we must not stray from our Canadian values. That’s why we believe that it is more critical now as ever to ensure that the problems introduced by inefficient Bill C-51 are addressed quickly, and effectively.

Prime Minister Trudeau has said that C-51 is a priority – and it’s clear that you agree. In just the last week, over 10,000 Canadians have already sent emails directly to the Prime Minister asking him to consult with Canadians before introducing new legislation to address C-51’s legacy.

This morning, over 40 experts and civil society organizations joined the call, with a letter of their own. The letter, which OpenMedia has signed, takes your calls for consultation to the next level, by outlining what the government’s public consultation on C-51 should look like.

We have outlined three main stages of consultation that we believe are imperative to ensure that the voices of Canadians are heard:

1. Government position statement:We want the government to explicitly outline what was wrong with Canada’s legislation before C-51, and what in C-51 it intends to keep that it thinks will address these issues. Canadians need to understand what the government’s position is before engaging in creating a solution moving forward.

2. Public consultations:We’re asking for a national online consultative process, which will allow members of the Canadian public from coast to coast to coast adequate opportunity to have your voices heard and acted upon.

3. Consultation with experts and stakeholders:Lastly, we want to make sure the experts are included in the conversation throughout the process. These stakeholders will be key to ensuring that any new legislation introduced will respect the interests and needs of the Canadian public, and our rights and values.

In response to last week’s events, Prime Minister Trudeau said, “Governments have a responsibility to keep their citizens safe while defending our rights and freedoms. And that balance is something that the Canadian government and indeed all governments around the world will be focusing on.”

We couldn’t agree more, and we want to help the Prime Minister get the Canadians impacted by C-51, along with top privacy and security experts, to provide helpful input for his consultation process. It's important we get this right, so we need to put our best minds on the case.

We need a solution that protects Canadians – not one that puts us all at greater risk.

Tell Prime Minister Trudeau that you want to be a part of the solution.