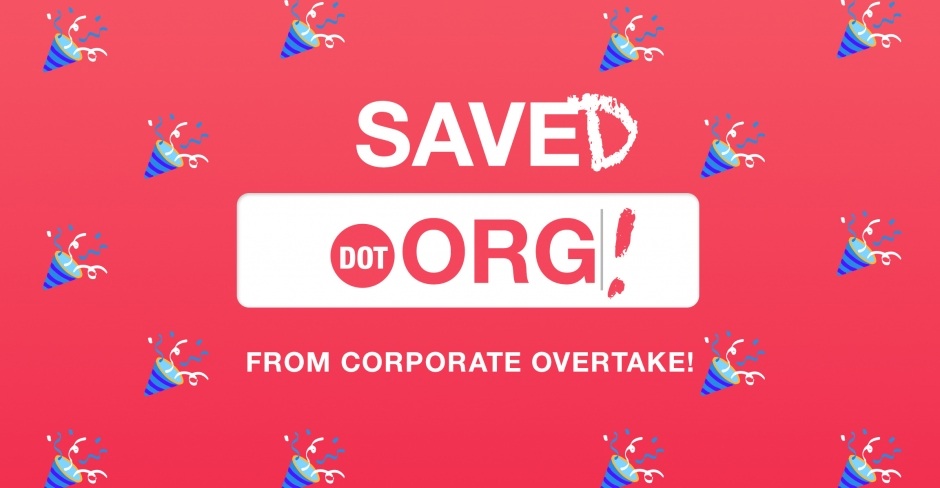 You saved the .ORG domain!

The OpenMedia community rallied together and helped save the .ORG domain registry from being sold to a private equity firm, protecting the interests of non-profits and charities.

The .ORG domain registry won’t be sold! In a huge win for the Internet and non-profits everywhere, ICANN has announced that it’s blocking the sale of the .ORG domain registry to Ethos Capital, a private equity firm. The controversial sale would have allowed a for-profit company to squeeze money out of the non-profit and charitable organizations that rely on .ORG domains to do their important work, and could have also opened up alternative revenue streams through censorship.

This victory comes after ICANN faced enormous public pressure to block the sale in the public interest. More than 25,000 members of the OpenMedia community spoke out against the problematic deal. When combined with the Electronic Frontier Foundation’s (EFF) petition, more than 50,000 people stood together against Ethos Capital turning non-profits and charities into cash cows. The message that ICANN received was clear: There is no public support for this deal.

In a statement on their website, ICANN writes that “global public interest” was a major factor in their decision to prevent the sale from going through. They also said that Ethos Capital, as a for-profit company, had no “meaningful plan to protect or serve the .ORG community” as they’re “bound to serve the interests of its corporate stakeholders.” While there are no announcements yet as to where this leaves the future of .ORG, we are hopeful that it will continue to be operated by a mission-based, non-profit, as it has for the last 20 years.

The entire team at OpenMedia wishes to extend our gratitude to everyone in the community who rallied together and acted to protect the interests of an open and free Internet. Without your efforts, the entire .ORG domain extension would be in the hands of a private company saddled with $360 million of debt, and the non-profits and charities that rely on the .ORG domain would be forced to help them pay it.

We’re thrilled that future has not come to pass, and we can continue enjoying untrammeled access to the non-commercial web. OpenMedia will continue to monitor the situation, and we’ll be making you aware of any new developments at ICANN or elsewhere that might threaten our open and free Internet.