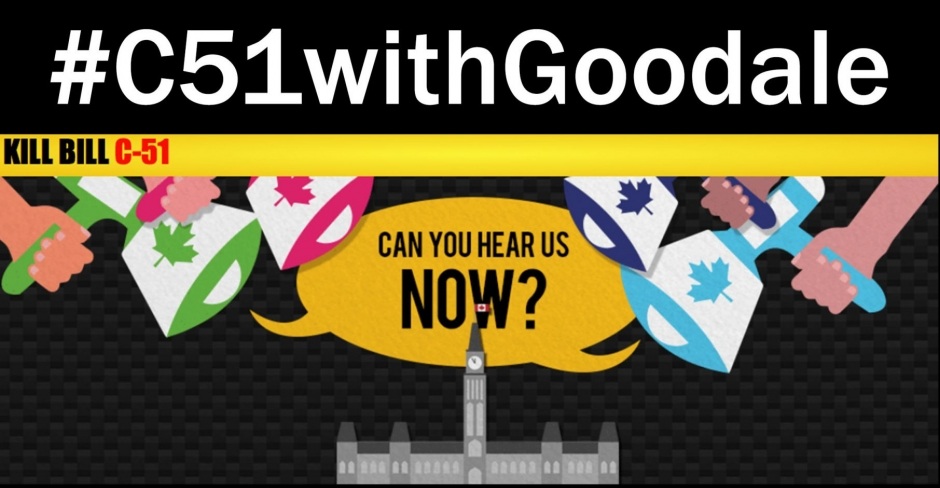 We’re meeting with Minister Goodale on C-51, and we want you to make sure your voices are heard: What should we say?

We are meeting in person with Canada’s Minister of Public Safety and Emergency Preparedness, Ralph Goodale to discuss Bill C-51 and we need you to tell us what you want us to say to him. Comment away below!

On Thursday, May 5, OpenMedia will be meeting in person with Canada’s Minister of Public Safety and Emergency Preparedness, Ralph Goodale to discuss Bill C-51.

This is where you come in: We need you to tell us what you want us to say!

You have been at the heart of this campaign from the very start. Over 300,000 people have spoken up against this dangerous and ineffective bill. Protests and rallies have been held across the country. Tens of thousands of emails have been sent to MPs. Artists, business leaders, law professors, civil society groups, academics, and experts have all spoken out against this reckless legislation that jeopardizes our rights and freedoms.

Now we need your help again: Tell us what you want us to say to Minister Goodale!

Ralph Goodale, Canada’s Minister of Public Safety and Emergency Preparedness, has been explicitly tasked by the Prime Minister with dealing with the legacy of C-51. This meeting is our best chance to help shape the upcoming public consultations, and make sure that Minister Goodale knows exactly what Canadians want done with this extreme bill.

We’ve been campaigning on this issue for over a year. We know a lot of what you think, but we also want to make sure that you have your chance to speak up.

What is your #1 priority for us to raise with Minister Goodale during our meeting?

Provide your insights adding your voices in the comments below, or by commenting on Facebook or Twitter using the #C51withGoodale.

As a reminder, here are some of the major concerns you’ve identified, and how the impacts of C-51 have already begun to be felt across the country:

Need a few more suggestions to get you started on your comments? Here are some examples of what we’ve been hearing on Facebook so far:

Let’s recap some of the key events to date:

This is our best chance to ensure that your issues are a part of the consultation agenda. Before it’s too late.

We want to make sure your voices are heard. Tell us what you want us to say!

Add your voice in the comments below, or by commenting on Facebook or Twitter using the #C51withGoodale.

Already shared your comments, and looking to do more? Feel free to send your MP a note about what you want the public consultations to look like, using our tool athttps://killc51.ca/mp.​