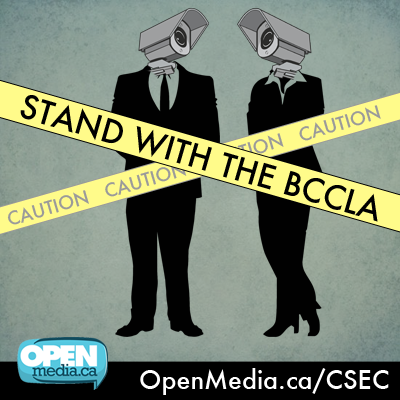 These lawyers are standing up for you

Think about what it means for the government to have the ability to listen to your phone calls, read your emails, and analyze who you talk to and where you go on the Internet. Think about the power this gives them. We’ve learned that our government has this power. Further, we’ve learned that they may have been using it for a number of years, with virtually no oversight.1 We’re at a tipping point - either we stand up now to defend our hard-won privacy rights, or we could end up with invasive government surveillance over every aspect of our lives.

Today, our privacy coalition partner, the BCCLA is taking the Government to court for unconstitutional collection of Canadians’ sensitive private data. We need you to stand with us now and support this critical fight for your privacy rights.

We believe that the act of secretly collecting and storing the private information of innocent law-abiding Canadians is in itself an abuse of power -- the government’s own watchdog has flagged this as a threat.2

This surveillance activity will cost over $4 billion of our tax dollars3 and in recent years the government has already had over 3,000 breaches of citizen data.4

Privacy rights aren’t a partisan issue; that’s why over 35 organizations, including the BCCLA, recently came together to form the Protect Our Privacy Coalition.

Click here to stand with us and the BCCLA in demanding that the Government respect the privacy of Canadians. Together, we will not allow this extraordinary power to continue to go unchecked.

We’ll keep winning so long as we keep the pressure on. We believe in privacy.With your help, we can safeguard the privacy rights of Canadians for future generations.

With gratitude for all that you do,

Steve, Jason, Reilly, and David on behalf of your OpenMedia.ca team.

PS. The government must stop its intrusion into the private lives of Canadians; please, chip in whatever you can to our campaign today so we can protect your privacy.

[1] CSEC: What do we know about Canada’s eavesdropping agency? Source: CBC News