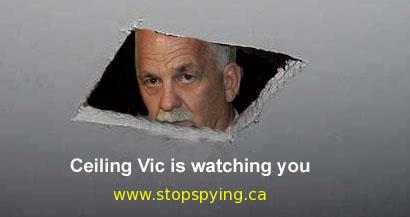 The Stop Online Spying petition just hit 100,000 signatures. This places the petition in historic territory; it is now one of Canada's largest online petitions and grassroots campaigns ever. This seems like a good moment for recognition and reflection as we move on to the next phase of the campaign. The beginning When we launched the Stop Online Spying campaign with a coalition of groups and community members back in June 2011, we called on Canadians to stand up for their right to privacy and free expression. We were immediately taken aback by the passion and dedication they showed. After Parliament resumed last fall, we knew we needed to scale up the the campaign, so we called on the pro-Internet community to educate their fellow Canadians through these citizen-produced short videos. You came through! The videos have been viewed over 120,000 times, and were picked up by national TV news on several occasions. Bowing to this pressure, the government pulled the lawful access bills out of the omnibus crime bill, marking a major milestone for the campaign.

Flash forward to 2012: we knew that the online spying legislation would be tabled early in the year, so we got to work immediately. We helped other groups in the Stop Online Spying Coalition to organize a series of screenings and forums. Later, we revealed that the police were busy using your tax dollars to have law enforcement officials scrape together excuses for warrantless access to private information. This revelation made it abundantly clear that the online spying scheme is a solution in search of a problem.

A launchpad for citizen engagement

When it was revealed that the legislation would be unveiled this week, we kicked into high gear and got in front of the story, which turned out to be crucial, considering Minister Vic Toews’ deceptive PR tactics. We called on Canadians to sign our petition, send a message to MPs, and make noise. And did you ever.

We definitely couldn’t have predicted the creativity with which Canadians took to Twitter this week. At OpenMedia.ca, we’ve always seen ourselves as a platform with tools for citizen engagement and collaboration—community-driven and participatory. We’re proud to have been part of some amazing grassroots activity on this platform in the past, but this week has been truly inspiring. When we asked Canadians to spread the word on social media, we were expecting a lot of ReTweets and simple shares. We were pleasantly surprised to see the creativity, ingenuity, and hilarity of #TellVicEverything and #DontToewsMeBro.

I don’t think it would be an overstatement to say that social media is a new method of political engagement—it’s us, everyday Canadians, taking back the story and defining it ourselves. So many people are taking part in this campaign that #TellVicEverything was trending worldwide for a period, and it has been covered widely in the media, creating the kind of feedback loop that can move mountains. Maybe there’s a not-so-subtle message here? Maybe this is why the Internet needs to be safeguarded.

Is anybody in there?

I’m truly puzzled by the fact that this government seems unable or unwilling to listen to Canadians when it comes to digital policy. They can’t claim ignorance: at OpenMedia.ca we’ve met many Conservative MPs in the last year, and we laid out our well-researched, crowdsourced Action Plan. Clearly, that plan did not include a Cell Phone Squeeze, an Internet Lockdown, and an Online Spying scheme. No, we laid out a straightforward plan based on the principles of openness, choice, innovation, and access. Our common-sense recommendations are based on research and lessons learned from other countries like the UK. This government cannot say they don’t know where Canadians stand. Quite frankly, I’d like to know who they’re getting their marching orders from. What I can say for sure—they’re definitely not listening to Canadians.

That’s why they’re getting an earful from Canadians now.

Vic Toews and the government are under fire this week because, on this file at least, they’ve become arrogant and deaf to Canadians. The size of the public outcry is befitting when we consider the depth of the government's arrogance. Canadians were already concerned and upset that Toews was misleading Canadians about access to our private information. Then he made the now famous statement that Canadians “can either stand with us or with the child pornographers.” In fact, Toews has been vilifying his opposition with this language for weeks. But far more damning is the revelation that the name of the legislation was changed at the last minute from the “Lawful Access Act” as it’s been called for years, to the “Protecting Children from Internet Predators Act”—many have since pointed out that the legislation doesn’t even contain the word “child” (once!).

I sincerely think that Vic Toews owes Canada an apology. He has insinuated that the majority of us are standing with child pornographers and he’s used the most primal fears of Canadian families for his own political shenanigans. At the very least, he owes Canadians a retraction and an apology.

To be clear, what we’re actually talking about is providing a range of authorities with access to the private information of any Canadian, at anytime, without a warrant. I’m going to emphasize “any Canadian”.

Backpedalling is not good enough

The government has started to backpedal. Agreeing to entertain amendments is not anything close to a peace offering but rather the way Parliament is supposed to work.

I’m glad the government is starting to listen to the 100,000+ who signed the Stop Online Spying petition and the 8-in-10 Canadians that are against warrantless access to private information. But if the government is truly listening to Canadians, they should make a clear commitment to actually change the legislation. They can start by reading this letter that the Stop Online Spying Coalition and leading legal experts sent to Harper.

Here are some commitments Canadians should be looking for now:

There shouldn’t need to be a widespread outcry or years of protracted action for policymakers to listen. I really do hope the government has learned from this experience. The 21st century is an age of participation, and Canadians want policies to be citizen-led from the start, not crafted behind closed doors by lobbyists.

Canadians started this debate by signing and sharing petitions en masse; they’ve gone viral and have led to media coverage from every major media outlet (for examples see here, here, here, and here).

Thanks to your videos, signatures, letters, tweets, Facebook shares, event coordination, donations, graphic design, and more, there’s a massive national debate happening right now with YOU at the centre.

It’s time to put Canadians in the driver’s seat of policy development. Let’s fix this legislation and move forward together.