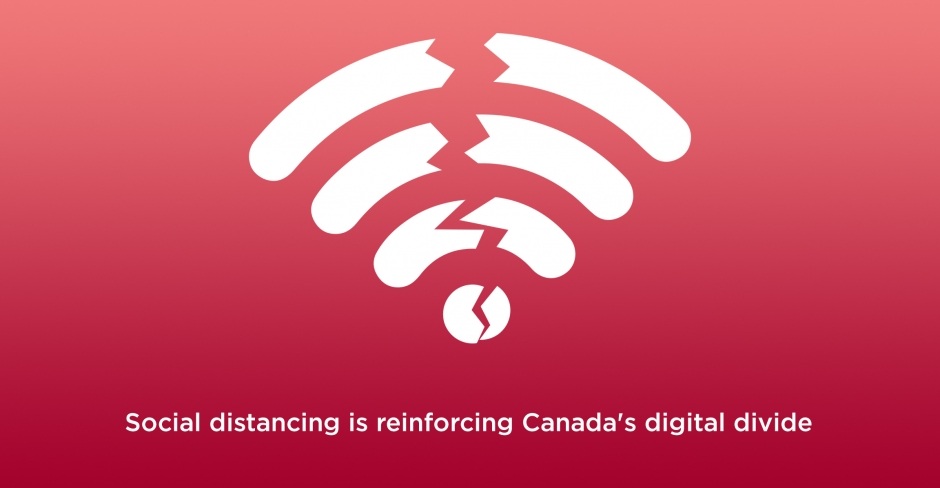 This article was originally published by Rabble.ca

Over the last month, you've probably been relying on the internet more than ever before. The social distancing practices the government of Canada is recommending to flatten the curve of COVID-19 have changed the internet from being an invaluable facilitator to strictly required for just about everything. From working from home for those who can do it, to hastily assembled online classes for school and university students, to keeping up with the movements of the virus, wellness checks with remote family and friends, and hearing and responding to new directives from local government, a lot of us are depending on the Internet to make our continued lives possible.

Unfortunately, not everyone is able to take part in this shift to an entirely digital lifestyle. For years we've known that rural and lower income people in Canada are trapped on the wrong side of a deep digital divide, with limited internet access and substandard service. And as basic internet access has improved over time, so have the speed and latency requirements of modern applications -- leaving their utility largely out of reach for far too many. We cannot allow lack of access, unaffordable service, restrictive data caps or slow speeds to further marginalize Canada's most vulnerable populations during a time of social distancing.

Let's put some numbers to the problem. In 2018, the Canadian Radio-television and Telecommunications Commission reported that 63 per cent of rural households did not have access to 50 Mpbs download/ 10 Mbps upload internet, the government's minimum speed target for service that delivers the features of the modern digital economy. The First Nations Technology Council estimates 75 per cent of communities lack access to those speeds. As Innovation, Science and Eocnomic Development Canada put it in a report last year, the serious problem these households have is "speed," with connections too slow for the "cloud-based software applications … or online learning resources" which are essential to keeping up with expectations of continued work and study through the pandemic.

For low-income communities, the digital divide exists in even the most well connected cities. At least 4.4 per cent of youth in Canada from low income households lack home internet, and up to six per cent of students may be relying on computers in local libraries and community centres to connect. In the lowest income quintile of Canadian households, more than 1 in 3 homes do not have a computer at all.

The federal government's broadband connectivity targets promise to bring everyone online by 2030 -- a target that implies some people can afford to wait, while others charge forward. But the current pandemic is revealing just how flawed this plan is. Respected health authorities are now telling us that some degree of social distancing may be necessary for up to eight months, and that restrictions may need to be re-imposed if we see a second wave of infection.

This period of time will be difficult for all of us; but for those currently cut off from the modern internet, without significant intervention to improve their access now, it could mean disaster. Unable to telecommute or keep up with school, let alone connect with friends and family, many already marginalized households will permanently lose ground, even well after society returns to something more normal.

What can we do about it? In the short term, OpenMedia is calling on ISPs in Canada to do their part to help: by removing data caps, promising not to disconnect any households that cannot pay their bills for the duration of social isolation, and making existing and new public wifi networks open to the public for anyone who needs access. We would also like to see mobile service providers follow suit, as T-Mobile has in the U.S., to support the significant number of lower income homes who have mobile service but no computer or home internet.

COVID-19 is showing us that waiting until 2030 to close the digital divide is not an option. Over the coming weeks and months, technology and infrastructure companies, community groups and every level of government must collaborate on innovative stopgap services that meet urgent connectivity needs. But we can't stop there. Of all the investments and policies the government is putting in place to protect people in Canada throughout the pandemic, accelerating the rollout of a national broadband strategy and bridging the digital divide must be high atop the list.

Matt Hatfield is the campaigns director of OpenMedia.

You did it, Toronto! It’s full steam ahead for Community Broadband! February 08 2021