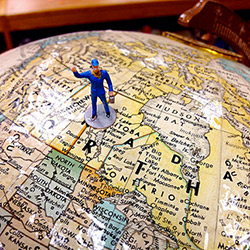 Save the Internet, Save the World: The Defining Battle for Net Neutrality

Guest blog by OpenMedia community member Cynthia Khoo The world needs a hero, and that hero is you. Our worldwide web is currently dangling above an alligator-filled moat, tied to the train tracks, strapped to a live bomb (tick-tock), and rapidly headed towards gory destruction at the end of a Comcast/Bell/ [insert-your-country's-biggest-telco-name-here]-branded conveyor belt. Time of death: 12:00am. Cause of death: Big Telecom, aggressive lobbying, money and power imbalances, and a misguided FCC net neutrality decision that ignores over 1.1 million comments and counting from everyday Internet users like you.

You know how Facebook asked Page owners to pay up if they wanted their content to actually show up on people's news feeds? Without Net Neutrality, the entire Internet would be like that, for all content ever. Cable company f***ery, indeed.

But it doesn’t have to turn out that way. The battle for Net Neutrality is ours to win. Reinforcementspour inevery day. We've gained reprieves in the form of not one, but two deadline extensions– a sign that the FCC recognizes how important Net Neutrality is, and how many people care about it. This battle may be located in the United States, but make no mistake—its outcome will affect the entire world.

Just to make it extra clear, here is some of what will happen if the FCC decides to scrap net neturality and force us into an Internet slow lane: your favourite start-ups disappear; your small business folds; corporations' biases block your freedom of speech; your job rights are unethically suppressed; and your civil rights and liberties—whether concerned with gender, race, sexual orientation, or otherwise—become even harder to fight for; and your go-to media sites (Netflix, BitTorrent) get throttled - cable companies make sore winners. Ultimately, you’ll end up paying more, for less. What a deal!

This battle is currently waging in the United States, but thanks to their economic, political, and cultural clout, their screw-ups could screw all of us. Do you live in Canada, Australia, Singapore, or Vietnam? Then you've probably already experienced firsthand the U.S. habit of imposing its own digital policies on foreign countries through trade agreements such as ACTA and the Trans-Pacific Partnership. If your country's economy has anything to do with the Internet in the United States, be prepared for hiked prices, slower service, less diversity and innovation, and serious personal spaceissues.

This is a global call-out. While all eyes are on the United States—for good reason—the same battle is or will be soon playing out in India, East Asia, the Caribbean, Australia, and New Zealand.

The good news is that several countries have already claimed decisive victories for net neutrality: Chile (the first in the world to do so), the Netherlands, Brazil (in their revolutionary Internet Bill of Rights), Slovenia, Mexico (albeit with privacy and surveillance losses), and the entire European Union could all teach the FCCa thingor two about listening to citizens. This is an uphill battle, but it’s clearly winnable if we rally enough popular and political willpower. Momentum is high, we are all in this together, and the time to act is now.

The United Nations has declared Internet access a human right, and this is the United States' chance to set a formidable example and come out as a leader for the rest of the world where Net Neutrality is still in question. But in the meantime, we won’t stand by and wait. The stakes are too high and the consequences too widespread. Stay tuned for a new campaign from OpenMedia that we hope will create the greatest and loudest worldwide call to save the open Internet yet.

In the meantime, if you haven’t already, please speak out for the open Internet by speaking out against Big Telecom’s Internet slow lane plan at https://openmedia.org/slowlane