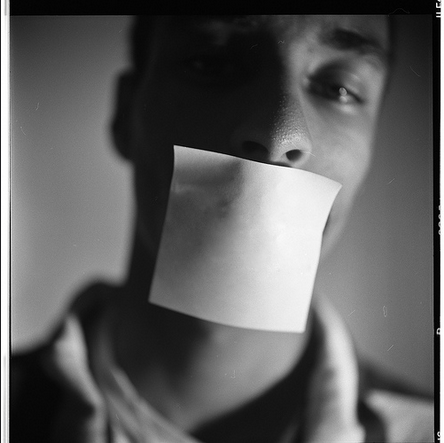 Guest blog by Cynthia Khoo Imagine finding that your favourite music blog, political forum, or video remix has disappeared overnight. What happened? It may well have fallen victim to censorship via notice-and-takedown, copyright law's most misused tool. If popular user-driven websites such as eBay, YouTube, or Wordpress receive a copyright infringement notice, they must take down the offending content or risk being sued. The problem is that anyone can send a notice, and nobody confirms if the claim is legal or reasonable before taking action. As a result, Internet content disappears rapidly, amounting to wide-scale censorship of what is normally protected speech. Check out the casualties at Chilling Effects and EFF's Takedown Hall of Shame. Below are five major ways that individuals and organizations are abusing copyright law to get away with online censorship.

Organizations can use copyright to silence political speech that wouldn't otherwise be vulnerable to censorship. For example, Alberta's tourism bureau used a copyright takedown notice to remove a movie trailer satirizing public relations about the Alberta tar sands. Russia launched “anti-piracy raids” to persecute government critics, while Straight Pride UK silenced a British student. NBC Universal removed a viral clip of U.S. Senator Elizabeth Warren shutting down a CNBC co-anchor, and deleted an Obama campaign video because of a copyright complaint. Diebold even tried to suppress criticism of vulnerabilities in its e-voting software. Clearly, copyright laws are being used as a new censorship tool that allows a workaround against freedom of expression and open political discourse.

Copyright is also used to suppress speech a complainant disagrees with or dislikes - a way in which it was never meant to be used. CanWest sued over a satirical parody of the Vancouver Sun; St. Louis University sued their faculty to bury a survey; Universal Music forced the takedown of a bad review; and a blogger bombarded her rival with copyright notices to shut her down. Copyright law this easily manipulated for bogus and bad faith claims wastes valuable resources, and often harms the very creators it exists to protect.

People and companies also use copyright law to censor publication of gaffes. Encana Corp tried to quell a Globe and Mail conference call recording, while KTVU news station used copyright to remove videos of their newscaster making an embarrassing and allegedly racist mistake. Copyright is meant to protect creators' economic interests and spur innovation, not protect reputations and public image.

You know copyright has gone too far when people use it to claim control over content that is already legally accessible to everyone in the public domain. For instance, Canada Post sued Geolytica for compiling a crowd-sourced postal code database, claiming copyright over postal codes. Other targets include: Martin Luther King's “I Have a Dream” speech; a political video featuring, “This Land Is Your Land” which has been in the public domain since 1973. Not only do people abuse existing copyright for censorship, they also use non-existent copyright to further remove legal content from the public.

Copyright law can censor online content by facilitating removal through baseless claims, pointless or vindictive suits, takedown requests targeting non-infringing content, and automatic takedown systems with no humans involved to assess the merit of the claim. Casualties include: a public domain NASA video of the Mars Curiosity Rover landing, the Hugo Awards, top hip hop blogs, and even the 2012 Democratic National Convention.

If all the above sounds nuts, hold on to your hats, as things could be about to get even worse. Ultra-secretive Trans-Pacific Partnership (TPP) talks, taking place in Ottawa right now, aim to finalize extreme new copyright rules that will make your Internet even more censored, expensive, and policed. We know from leaked documents that entire families could be kicked offline merely for being accused of small-scale copyright infringement. Negotiators know they’d never be able to get away with this if the public knew about it - that’s why the talks are taking place in near-total secrecy.

Your OpenMedia team is working hard to force TPP negotiators to listen to citizens’ voices. We’re meeting with them face to face next Wednesday, and we’ll be passing on the views of nearly 20,000 people who want sensible, balanced copyright rules that work for all of us in the 21st century. Don’t miss your chance to have a say - speak out at https://OpenMedia.org/FaceToFace and we’ll make sure negotiators hear your views loud and clear.

If you don't think that copyright law should be used as a shortcut to unhindered censorship across the Internet, then take action here:

Cynthia Khoo is an OpenMedia blogger and community member