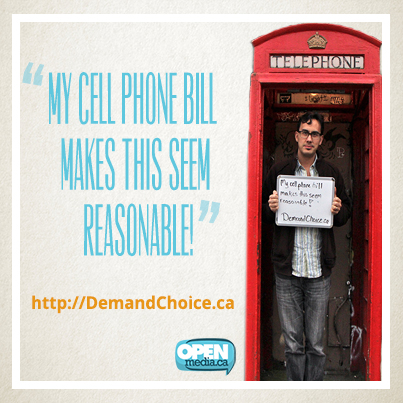 It’s been a fairly positive few weeks for Canada’s long-suffering cell phone users, who pay some of the highest prices for some of the worst service in the industrialized world. First we saw the CRTC release a long-awaited set of new rules to help protect cell phone users. These new rules come into effect in December and will put an end to most three-year contracts, will cap data overage charges both in Canada and while roaming abroad, and will make cell phone contracts much easier to understand.

Then Industry Minister Christian Paradis announced he would stop big telecom company Telus from taking over scarce wireless assets that had been set aside for more affordable wireless options for Canadians.

However positive these steps have been, they really only go part of the way toward addressing past policy failures. For years, we’ve seen the government pursue an incoherent policy, and refusing to enforce its own rules while standing aside as Big Telecom gained more and more power and control over our wireless sector.

Even after the CRTC and Industry Canada announcements, Canadians are still stuck with a broken wireless market, 94% dominated by just three unaccountable Big Telecom conglomerates. It’s become increasingly clear that Canadians need a long-term solution rather than a failed piecemeal approach. What will it take to bring about a real, lasting shift toward genuine choice and affordability?

A number of prominent commentators from across the political spectrum are now turning to the idea of encouraging choice, by opening up Big Telecom's networks (both wired and wireless) to Canadians and new startup service providers . Policy wonks call this idea ‘structural separation’ – but in layman’s terms it means open communication networks -- putting an end to telecom companies controlling both their service delivery and also the infrastructure (such as cell phone towers) with which those services get delivered. This would create a level playing field, enabling new, affordable providers to compete effectively with the high-cost incumbents.

This idea has worked successfully in the United Kingdom, Australia, and New Zealand where BT, Telstra, and Telecom NZ were made to split apart their network infrastructure into a separate operation, so that it could be managed in a way that gave equal access to incumbents and their competitors. Cell phone users in all three countries now pay significantly less per month than Canadians, with citizen groups welcoming the improved choice on offer.

Canadians, by contrast, are still stuck with a closed, old-fashioned system in which monopolistic Big Telecom conglomerates decide whether, and at what cost, their competitors are allowed access to Canada’s wireless networks. This is a bit like giving FedEx (for example) the power to decide whether UPS and DHL get access to Canada’s roads and highways – it’s no wonder we have such high prices when incumbents have such a stranglehold over our communications infrastructure.

The conversation about how to open up our networks has already begun. There are some exciting examples out there of how communities have taken action to open up their communications infrastructure, including the Northern Indigenous Community Satellite Network in Northern Ontario. Whether achieved through communities, municipalities, provinces, or federally, Canadians and local communities deserve communication networks open to all.

Canada has been lagging behind for far too long. It’s time we opened up our networks and created a level playing field, with real incentives for investment, world class technology, innovations, and empowered customers. For this, we need a network that is open to all Canadians and service providers. What do you think the next steps are?