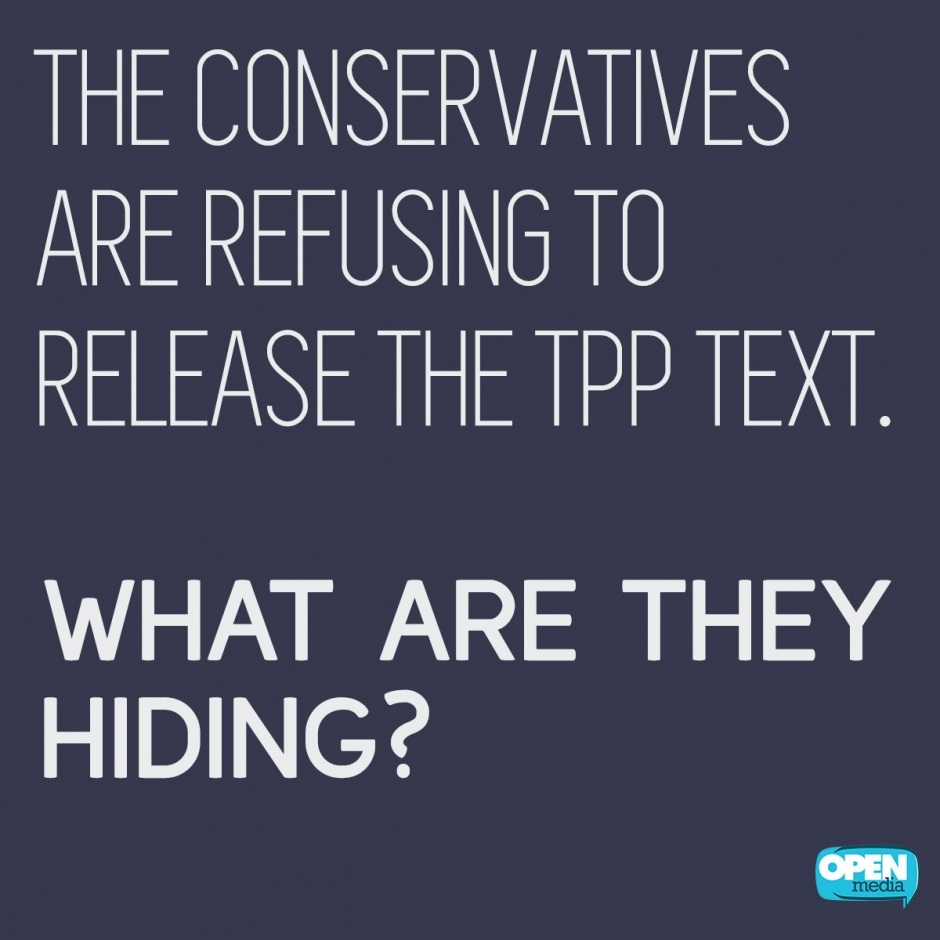 Why Internet Users Should be Very Angry about the TPP

The Trans-Pacific Partnership (TPP) exploded onto the Canadian media landscape last week, when negotiators from the 12 participating countries finally agreed on a deal. Even if you were paying attention, you might not have heard about the impacts on the Internet, since much of the focus was on the farming and auto sectors. But the TPP is about a lot more than dairy and cars – it’s also about our fundamental right to free expression. Maybe the neglect of digital rights is why the Canadian media coverage of the TPP was oddly positive – it simply ignored the great harm that the TPP represents to Internet freedom, and intellectual freedom more broadly. But well-respected economists like Joseph Stiglitz and Jeffrey Sachs have been paying attention, and sounding the alarm about the impacts this deal will have on things like generic drugs, and consequently people’s access to medicine.

The TPP will also make huge changes to the made-in-Canada copyright balance that distinguished us from the U.S. (read about some of the problems caused by changes to U.S. copyright law in our crowdsourced report). Those changes will take us even further away from the vision that Internet users around the world created via our “Digital Future” process -- where 300,000 people came together to speak out for free expression, respect for creators, and democratic processes. Here, we’ll lay out the most significant of the changes to our digital rights that the TPP proposes -- we’re giving you something to forward to family & friends who might be confused by the positive spin.

Do You Own What You Buy?

What’s your favourite song? Do you think that, say, in the next five years, you might put it on your current computer, a new computer, a couple phones, a tablet? Have you ever got that message from iTunes saying you only have 4 licenses left? What happens when the licenses run out not just for your one favourite song, but for your entire digital library? Would you consider using a software that might let you get around this iTunes licensing system – this digital lock, or “technological protection measure” (TPM) – in order to maintain your access to the content you’ve purchased?

Well, under the TPP, your computer could be taken and destroyed, as you’d have committed an offense under civil law. If there was a commercial benefit to your action, you could be criminally liable. The same applies to other circumventions of various rights management protections – like removing a watermark from an image, even if you attribute the image in some other way. As EFF points out, this could lead to a family's home computer being seized simply because of its use in sharing files online, or for ripping Blu-Ray movies to a media centre.

Increasingly, this will be a problem not just for early adopters of online technology but for people like farmers or mechanics – the “Internet of things” is bringing online technology into older industrial tech like cars and tractors. According to Vice, the TPP means that if a farmer decides he wants to use his own diagnostic software on his tractor and he bypasses John Deere’s protections, he could be in trouble with the law. Like the U.S. Digital Millennium Copyright Act, the TPP will mean that increasingly, we don’t own what we buy.

This was already a problem in Canada’s copyright legislation -- penalties for breaking digital locks were seen by many free expression advocates to go too far in what was otherwise a balanced approach. The penalties were fines of between $100 and $5,000; now, we’ll see people threatened with having their devices destroyed as well -- even if the material they are accessing by breaking the lock isn’t under copyright.

Tipping the Balance on Free Expression

And that’s not all that will change for people who love the Internet. The TPP will further compromise your ability to access content online, in ways that are not yet clear:

The above text from the TPP might sound relatively innocuous; it’s not. It may result in the dismantling of Canada’s notice-and-notice system for copyright enforcement -- a balanced and very effective approach where copyright infringement notices are forwarded from rights holders to Internet Service Providers to the Internet user, protecting the privacy of the user and preventing the kind of rampant political and personally motivated false takedowns that the U.S. DMCA made possible.

What this suggests is that Canadian ISPs will now have to take down content (not just send notices) if a court in another TPP signatory country rules that it breaks a copyright. Now, Canada has tended to protect things like parody and satire and education as part of fair dealing; other countries might not be so willing to uphold free expression. And their decisions will now be enforceable here. This definitely contravenes made-in-Canada copyright rules that digital rights advocates fought long and hard for; and perhaps explains why the Canadian TPP negotiator would not commit to respecting Canadian laws.

There may be an even more profound violation of Canada’s balanced laws here, as legal experts aren’t yet sure how the TPP text will be interpreted. Michael Geist has the clearest breakdown of how this might undo Canada’s copyright notification system entirely. This brings up another important point: the agreement itself is written in incomprehensible legal jargon that is obscure and open to interpretation (read: open to influence by those with deep pockets). This is another way that governments prevent citizen involvement and influence, and we often don’t even question why our laws, regulations, and treaties aren’t written in plain language that everyone can discuss and debate.

Copyright Term Extension: Why Does It Matter?

Like James Bond? Here’s a link to a free ebook version of Goldfinger. Prefer something a little more literary? Here’s Hemingway’s The Sun Also Rises.

But watch out! If the TPP gets ratified, this kind of thing will become illegal in Canada overnight. We mean publishing works by authors who’ve been dead for more than 50 years -- like Hemingway and James Bond creator Ian Fleming -- but not more than 70 years. The TPP extends our copyright term from life of the author plus 50 years (already an egregious overreach clearly intended to protect corporate owners, not long-dead artists) to life plus 70 years.

The money to pay for longer copyright terms comes right out of your pocket. New Zealand, a signatory to the TPP, released a brief calculating that the long-term cost of implementing the TPP’s extended copyright terms would be $55 million per year in lost savings on books, movies, and films (i.e. when you still have to pay for The Sun Also Rises for twenty more years). That’s in a country of less than 5 million people, that successfully negotiated a staged phase-in of the longer terms (Canada, for whatever reason, did not manage to get this treatment for itself).

In Canada, where the change will take place right away (*if* the treaty is ratified) and we have more than five times New Zealand’s population, we can guess that the costs will be much higher – in the hundreds of millions of dollars. There is no broader economic justification for this; in fact, a group of very prominent economists (including libertarian Milton Friedman) said the costs to the economy as a whole when the U.S. extended its own copyright term in this way would outweigh the benefits.

Not yet calculated is the loss to the economy and culture from the worsening of the “orphan works” problem -- as we detailed in our crowdsourced report “Our Digital Future,” the vast majority of recorded 20th century culture will be lost without laws that prioritize the public domain, either because works will be out-of-print and forgotten by the time their copyright term expires, or because their copyright holder cannot be found and their date of death is unknown. Extending copyright terms only aggravates this problem, which puts the vast holdings of libraries and archives out of reach of the public.

There’s a reason the U.S. Copyright Term Extension Act, which created the life+70 term, is derisively called the “Mickey Mouse Protection Act” -- like Hemingway and Ian Fleming, Walt Disney died in the 1960s. He’s not around to collect royalties or be incentivized to create new works. But the big media conglomerates, like the Disney Company – which own the rights to artistic works under copyright – are alive and well.

So when the end of copyright terms for the early Mickey Mouse movies were on the horizon, these conglomerates used their influence over the US political process to secure longer terms, to everyone else’s detriment. Likewise, the TPP simply reinforces the control of a handful of U.S. media conglomerates over culture. This is one reason why Canadian innovators like Jim Balsillie have spoken out against the TPP. As Balsillie says, “When you force harmonization when somebody’s in a dominant position, it means they spread their dominance...Free trade in an ideas economy with zero marginal cost – where ownership is everything – spreads global monopoly.”

And you can ask yourself: with the 12 TPP countries now agreeing to harmonize intellectual property rules, what will happen in 2036 -- the 70th anniversary of Walt Disney’s death? Will anything copyrighted to Walt ever enter the public domain? Will the rights of Big Media end, and the rights of the public to a shared cultural heritage – one we can remix and reimagine – begin?

Not if big media conglomerates can help it. These organizations, through their lobbyists, were some of the biggest influences on the TPP. This becomes apparent when you notice that, as EFF points out, most TPP provisions that recognize the rights of the public are non-binding; they’re more like suggestions. But those that benefit Big Media, like digital locks, and takedown systems, and longer copyright terms, are binding. That makes sense when you understand that while the public was shut out of the negotiations, big media lobbyists had very special insider access – as OpenMedia discovered when the TPP organizers accidentally sent us a non-disclosure agreement intended for these lobbyists.

An Assault on Democracy

As you may have heard, we only even know what’s in the TPP now because of the Wikileaks leak. The Conservative government just went back on a promise to release the text before the election on October 19th. This is consistent with their long-time approach to the TPP – to keep it secret, and shut citizens’ groups out of the process. This closed-door process allowed the negotiators to agree on something that contravenes what the Internet community has clearly articulated in our crowdsourced plan for free expression online, as well as in the Manila Principles, Copyright for Creativity’s Copyright Manifesto, and Article 19’s Principles on Freedom of Expression.

We’ve been diligent all along about continuing to influence the process, crashing the negotiations with petitions, streaming your comments on an iPad and a wall projection, and even shining a huge spotlight on the talks and hand deliveringletters to the negotiators. We could never have done this without the support of hundreds of thousands of engaged Internet users around the world - so thanks!

As a result of this, and all the work by amazing Internet freedom groups around the world, the tide has turned on the TPP at just the right moment. One of our main opposition parties, the NDP, has joined leading Democratic presidential candidates Bernie Sanders and Hillary Clinton in speaking out against this very bad deal. There’s still time now for you to join them.