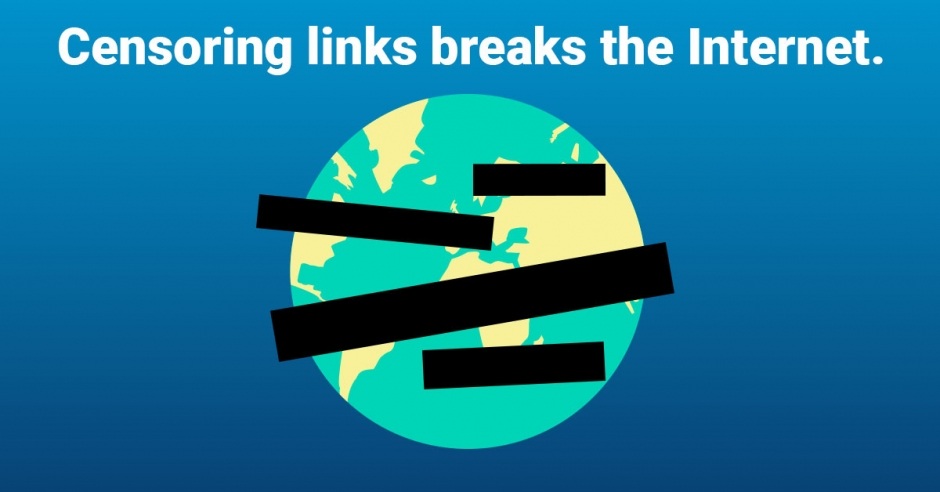 Why Internet Users Everywhere Should be Watching The EU Right Now

Lobbyists for old media conglomerates have a plan to censor links across the Internet.

The new regulations envisioned in this scheme aim to restrict our right to link to content and services of our choosing. If these new censorship powers are put into place it will fundamentally change the Web.

The plan is multi focal and moving forward in several domains at once including; courtbattles, international trade regulators, secretive trade agreements, and legislative processesaround the world.

These initiatives envision new restrictions on our right to link as a way for old media publishers to protect their out-dated business model.

These link censorship schemes also run completely counter to what the Internet community has clearly articulated in this crowdsourced plan for free expression online, as well as the Manila Principles, Copyright for Creativity’s Copyright Manifesto, and Article 19’s Principles on Freedom of Expression.

The battle in front of us:

We’re barrelling toward a key inflection point -- legislators in the EU Parliament are undertaking a series of key votes on copyright policy that threaten to usher in new link censorship schemes that will affect Internet users everywhere.

MEP Julia Reda has put forward a positive copyright reform report, but other MEPs with backing from lobbyists from old media publishers are looking to insert new and very dangerous link censorship powers into the proposal.

Our friends at Communia detailed some of the worst proposals here, but “#2: No freedom to link” stands out.

To make matters worse, another draft proposal from the EU Commission was just leaked that called for a requirement for websites to monitor user activities -- we suspect it’s in order to filter or censor links, but that can’t be verified. (The joy of finding out important policies through leaked documents continues.)

So what does all this mean?

Let us break it down: Reda’s proposal basically calls for the EU to support the right to link, noting that linking is a “fundamental building block of the Internet”.

Yet the above amendment and leaked proposal turns her initiative on its head by mandating that websites monitor user activity, filter content, verify and moderate expression. It would appear they may also need to regularly to monitor the websites that have been linked out to by users.

The above one-two-punch suggests that online services and websites–from major platforms like reddit and Twitter, to your favourite blog–would be liable for the content on the other end of every single link posted using their platform (A bit more on that here).

Think about that for a second–you, along with online platforms like Twitter and Facebook–could and would be sued if content on the other end of something you linked to was changed to something illegal. For example, you link to a blog, and the blogger edits the post with a new meme that happens to include (as they commonly do) a copyrighted image.

Should you be liable and face charges because something on the Internet changed? Of course not–and the dynamic nature of links and of the Web in general, make a regime like this unfathomable, and frankly impossible to enforce.

“The UK's Interior Ministry (the “Home Office”) once funded a project called the “Technical Advisory Board" and linked the Home Office website to the project. After a certain amount of time, the project was completed and the contractors stopped updating the website.

Should the Home Office have been held liable for the fact that something happened that was completely outside its control? Of course not.”

In short, with these link censorship proposals, websites, blogs and online services would need to surveil users, unilaterally assess the legality of expression, and remove content (inevitably capturing legal content) of users. This runs completely counter to free expression and access to knowledge.

It will affect Internet users everywhere

The link censorship proposal above will be put before a major EU vote (by EU Legal Affairs Committee members) in mid-June. They have just recently been revealed to the public and it’s important that there is a strong response from the Internet that we will not put up with these schemes.

And let’s be clear, this will affect those in the EU most, but it will affect Internet users everywhere. Here’s how:

1. You may not live in the EU but many of your favourite websites do, as does some of the content and technologies that make up the foundation of web services around the world.

For example, SoundCloud–an audio distribution site based in Germany–is used by over 175 million unique monthly listeners and countless businesses around the world, while content creators upload about 12 hours worth of audio every minute. If they are forced to censor user links we’ll feel that everywhere. The prospect of costly lawsuits will also kill startups that could be the next SoundCloud.

2. The EU represents almost 20 per cent of global Internet traffic, and is very influential regarding digital policy. With link censorship proposals already under way in various policy-making bodies nationally and internationally -- this decision will have a cascading effect.

We need to stop these proposals everywhere, but it will be much more difficult to do so if this scheme in the EU moves forward.

Are you ready for some good news?

An international network of organizations and people are coming together to “Save The Link”.

Now that these link censorship schemes have been revealed it’s critical for the Internet community to show clear public opposition to these backwards ideas.

The Save The Link network will formally launch on May 6th and we need to grow the users in support of the network as much as possible.

We hope this initiative will show MEPs and decision-makers around the world that censorship plans face fierce opposition, and that we expect them to prioritize free expression online.

Join us and we can kill this link censorship amendment now, and send a clear message to decision-makers and old media.

We used over 20 links in this post alone to help illustrate the point -- now imagine how lost you would feel without them. Join us at: http://SaveTheLink.org