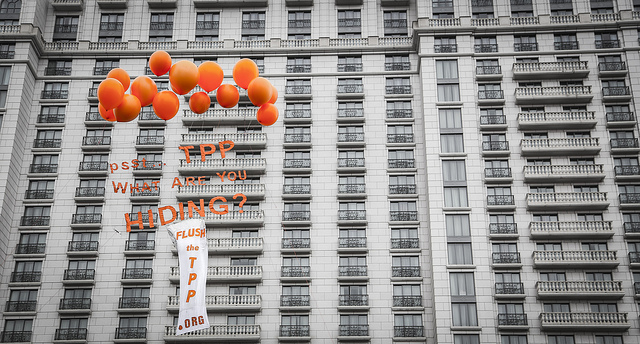 What the Internet Needs vs. What the TPP Demands

Who should make the policies that will determine the future of the Internet? A select list of corporate lobbyists and unelected government officials, meeting without public oversight or involvement? Or -- Internet users and digital policy experts, using digital tools and thoughtful processes, combined with review and sign-off by elected decision makers and the general public?

At OpenMedia, we firmly believe the latter: that Internet users and experts will make better decisions than media conglomerates who just want to protect their outdated business models. The Internet provides us with new tools to reinvigorate democracy – to bring decision-making closer to the people who will be most directly impacted – that we’ve only just begun to explore.

That’s why we built a drag-and-drop crowdsourcing tool, consulted experts to put together the most important questions about the future of free expression online, and then launched our Digital Future process. This allowed over 300,000 people around the world to express concerns about the TPP, including over 40,000 people who crowdsourced a new positive vision for free expression together.

Now that the final text of the TPP chapter on Intellectual Property has been released by Wikileaks, we can see how it compares to the three recommendations that came from our crowdsourced agenda for free expression. Does what lobbyists and unelected trade representatives put together reflect what Internet users want?

“We believe in respect for artists. Having a fair and flexible copyright system means that artists can make a living off their work, while users have the freedom to share, collaborate and create online. Copyright rules should therefore support platforms, business models, and alternative licensing systems – like Creative Commons – that give content creators greater control over distribution, while also encouraging citizens’ rights to share with others.”

The majority of Our Digital Future participants – the folks from 155 countries who used our drag-and-drop crowdsourcing tool – wanted to see between 75% and 100% of the revenue for works going to artists themselves. Given the great potential for artists to eliminate middlemen like record companies and keep more of their revenue for themselves with online distribution tools, a high priority for us at OpenMedia is maintaining artists’ access to the Internet, and their ability to share their works online.

One of our biggest concerns with earlier drafts of the TPP was a potential requirement for Internet Service Providers (ISPs) to terminate accounts of people caught infringing copyright – basically, banning people from the Internet if they were accused of illegal downloads (an approach that has been shown to fail and was scrapped in places like France). Though that requirement has been removed, now the final TPP text includes a clause allowing for the destruction of equipment if it is used to circumvent digital locks or create illegal copies. It also includes the potential for criminal penalties in some cases. As EFF points out, “this could lead to a family's home computer becoming seized simply because of its use in sharing files online, or for ripping Blu-Ray movies to a media center”. This contravenes the recommendation of Our Digital Future participants that penalties should focus on compensating creators.

Moreover (as we’ll discuss in greater detail later on) the TPP entrenches notice-and-takedown style systems, where copyright holders can force ISPs to take content down instead of merely notifying the Internet user that they may be infringing copyright (a balanced and more effectivesystem). The automated systems that have been set up to deal with this style of copyright enforcement – such as YouTube’s ContentID – result in creators who use Creative Commons (CC) having their works summarily removed from the Internet, and from their largest potential audience.

For example, popular (and now defunct) torrent site isoHunt was forced to use a site-wide keyword filter provided by the MPAA, which included word combinations like “The Kingdom” and “The Heat.” Along with copyrighted works, this filter blocked content from independent artists like musician Elliot Wallace and film-maker Brian Taylor, whose CC licensed works triggered the overly broad and generic keyword filters. To quote Taylor: “My original material being blocked in the U.S. hurts my chances of: being discovered, making money, making more art.”

The scope of these types of claims is mind-boggling: Google receives requests to remove tens of millions of URLs each month. That this type of system is now written into a trade deal for the 12 TPP countries (with a potential partial exemption for Canada that we’ll discuss later) makes it much harder to change, greatly increasing the challenge for digital rights activists who have been fighting this type of copyright enforcement for years.

But these are not the only worrying aspects of the TPP for artists: the TPP’s blanket extension of copyright terms to 70 years after the death of the creator will greatly diminish the public domain -- our shared cultural wealth that artists draw on to remix and recombine into new works. Only 4% of Digital Future respondents thought that copyright terms should last as long as the final TPP text requires. Whether works we likely consider as part of our common cultural heritage or folk tradition are in the public domain or not can have a very significant impact on creators. For example, for those in the English speaking TPP countries, we can feel the realism of a film or television show where characters sing “Happy Birthday” at a birthday party–and the unreality of a scene in which they sing anything else. Yet in order to represent this everyday reality, creators needed to pay thousands of dollars in royalties to Warner Brothers, which collected over U.S. $2 million per year from a claim to the copyright on the song that was recently ruled invalid. No word yet on whether Warner Brothers will have to repay the money it collected during decades of illegitimate copyright enforcement.

And that’s the real problem with the TPP for artists -- it further tips an already-unfair system much further in the direction of Big Media control. While Big Media can fight the court cases and create the automated takedown systems that the TPP encourages, regular users and creators have very little recourse when they are unfairly accused, made to pay royalties on bogus copyright claims, or served up overly severe penalties. We need this system to get better, not worse -- the TPP takes us in the wrong direction.

Most of the TPP countries have a notice-and-takedown system already or will now be obliged to create one; the exception is Canada, which has a notice-and-notice system (purported to be protected in a special annex to the treaty, though digital rights experts have their doubts). Chile has its higher threshold of a judicial order (rather than just a notice from the rights holder) for a takedown protected as well, but no other country will be able to create this type of system in the future. ISPs would no longer face financial liability for copyright violations (a provision in earlier drafts of the TPP) but they would need to be able to take the content down, and there is a vague clause stating ISPs should be given “legal incentives” to work with copyright claimants (see more from EFF). And though the TPP allows for the creation of independent bodies to review takedown notices, it does not require them.

This creates the potential for copyright claims to be used as a form of censorship, something experienced by the many people falsely accused of copyright infringement every year. Our Digital Future participants overwhelmingly suggested that we prioritize free expression in designing our copyright laws; the TPP puts free expression at the back of the line, behind the ability for Big Media conglomerates to control what we can and can’t share online.

It doesn’t just do this through creating or enforcing domestic notice-and-takedown systems; it also makes the rulings of foreign courts on copyright infringement enforceable across all 12 TPP countries. This could mean a race to the bottom in terms of important exemptions to copyright such as fair use and fair dealing. The vast majority of our Digital Future participants wanted to see uses of copyrighted material for parody, remix, fan fiction, review & commentary protected. But if one TPP country’s courts don’t have a reasonable interpretation of fair use or fair dealing, and instead rule that a copyright infringement has occurred, every TPP signatory would be required to take down the content in question.

Digital rights advocates have had to pore over the leaked text just to isolate these worrying provisions. Take a read of the TPP IP Chapter now over at Wikileaks -- you’ll quickly see that this text is not designed to be readable by the general public. It’s bureaucratic, opaque and vague -- likely to be open to interpretation, and you can be sure things will be fought over in courts, where those with pockets deep enough for legal fees will have an advantage. It flagrantly flies in the face of one of the most important recommendations of Our Digital Future process: that copyright laws be written in a clear, concise manner, designed to be accessible to the people they are meant to serve. A straightforward approach to copyright would help create empowered and educated citizens of the Internet, who understand how to share, give credit, and exercise their free expression rights. The TPP takes us even further away from this, by adding another layer of bureaucratic jargon and the potential for wrangling in a dozen different court systems.

“As part of our crowdsourcing process, we asked participants a specific question about how they would like to see copyright law decided. A sizeable majority (72.3 percent) of 9,475 respondents agreed that their country should ‘Design copyright laws by following Finland’s example, launching a participatory multi-stakeholder process that involves the general public, including Internet users and creators as well as copyright law experts.’ In sharp contrast, less than one percent of respondents supported the idea that their country should: ‘Design copyright laws by conforming to international trade agreements, like the Trans-Pacific Partnership (TPP), that have been decided by trade representatives and industry, with limited public consultation.’”

It is of course on the final recommendation, to embrace democratic processes, that the TPP is most dramatically out of step with what Internet users want. As Evan Greer, Campaign Director for Our Fair Deal coalition partner Fight for the Future says, nobody should be surprised by bad outcomes on things like copyright term extensions. Greer is quoted in The Guardian saying: “It should have been obvious to anyone observing the process, where appointed government bureaucrats and monopolistic companies were given more access to the text than elected officials and journalists, that this would be the result.”

Though ordinary Internet users were almost never consulted or invited into the negotiations, OpenMedia and our coalition partners have been diligent all along about continuing to influence the process. We’ve crashed the negotiations with petitions, streamed your comments on an iPad and a wall projection, shone a huge spotlight on the talks, and hand delivered letters to the negotiators.

As a result, all is far from lost for free expression online – the tide is turning on the TPP at just the right moment. Leading Democratic presidential candidates Bernie Sanders and Hillary Clinton have joined economists like Jeffrey Sachs and Nobel laureate Joseph Stiglitz in speaking out against the TPP.