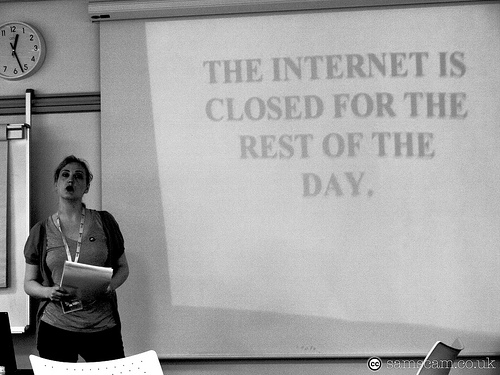 The lobbyists behind warrantless online spying

Who, exactly, wants warrantless online spying? That’s one question that members of the pro-Internet community have been asking us via email, Facebook, and Twitter, since we launched the Stop Online Spying campaign earlier this year to combat the government’s invasive new bills. After years of fighting for the open and affordable Internet, we at OpenMedia.ca have come to learn this: it’s not regulators or the government that want to close the Internet in Canada. Rather, it’s the lobbying arms of big corporations that push for policies that favour their own narrow interests. Big Telecom has put a mind-blowing amount of cash toward convincing policymakers that they should be able to raise prices on Canadians and discriminate against the open Internet. But who’s pushing for warrantless online spying?

In short, we’re not sure, but we have ruled out some groups:

Over 75,000 people have signed the petition against the online spying bills at http://StopSpying.ca, and over 100,000 have watched or shared our citizen-made PSA-style videos. Further to this, a survey taken by the Office of the Privacy Commissioner indicates that 8-in-10 Canadians oppose warrantless online spying. But you know this, so let’s move on.

While Big Telecom is responsible for a lot of Canadians’ Internet woes, it doesn’t appear to have much to do with online spying. Jonathan Daniels, a VP at Bell, says the carrier has “big concerns about the capital requirements” for online spying infrastructure and operating costs. Bell hasn’t explicitly come out in opposition to online spying, but they certainly don’t seem to be the force behind it either.

Indie ISPs are even more concerned about the cost of the online spying bills. A spokesperson for CNOC, a group of indie ISPs, told attendees of a conference in Toronto that the online spying bills could mean “game over.” There might be an impact for ISPs of all sizes, he added, but the government’s consideration of this is especially “crucial” for small ISPs.

That’s right, the police didn’t even ask for this. When our founder, Steve Anderson, went on CTV to debate the President of the Canadian Police Association, we learned something interesting: law enforcement officials weren’t asking to circumvent court oversight at all. In fact, they didn’t seem to know about that aspect of the online spying bills.

At this point we need to ask ourselves, “Who does warrantless online spying benefit?”

Well to start, Wikileaks recently released hundreds of files detailing a global industry that gives governments tools to spy on their citizens. Warrantless online spying laws would certainly be good for those companies’ bottom line. We know from coming up against Big Telecom that corporations will use lobbyists liberally to defend their turf, even when what they fight for contravenes the public interest.

In Canada, we may be looking at companies like Allot, Sandvine, Arbor-Ellacoay, and a few of the other big DPI (deep packet inspection allows ISPs to analyze and control traffic—learn about it here) vendors at the carrier level. You can also check out this nifty interactive map for a bit more information about surveillance worldwide.

The fight we face in the coming year may be against both Big Telecom and Big Surveillance. Canadians need to come together to remind the government that it works for us, and that we want an Internet that is open, affordable, and surveillance-free.

--
Join the force by signing the Stop Online Spying petition »