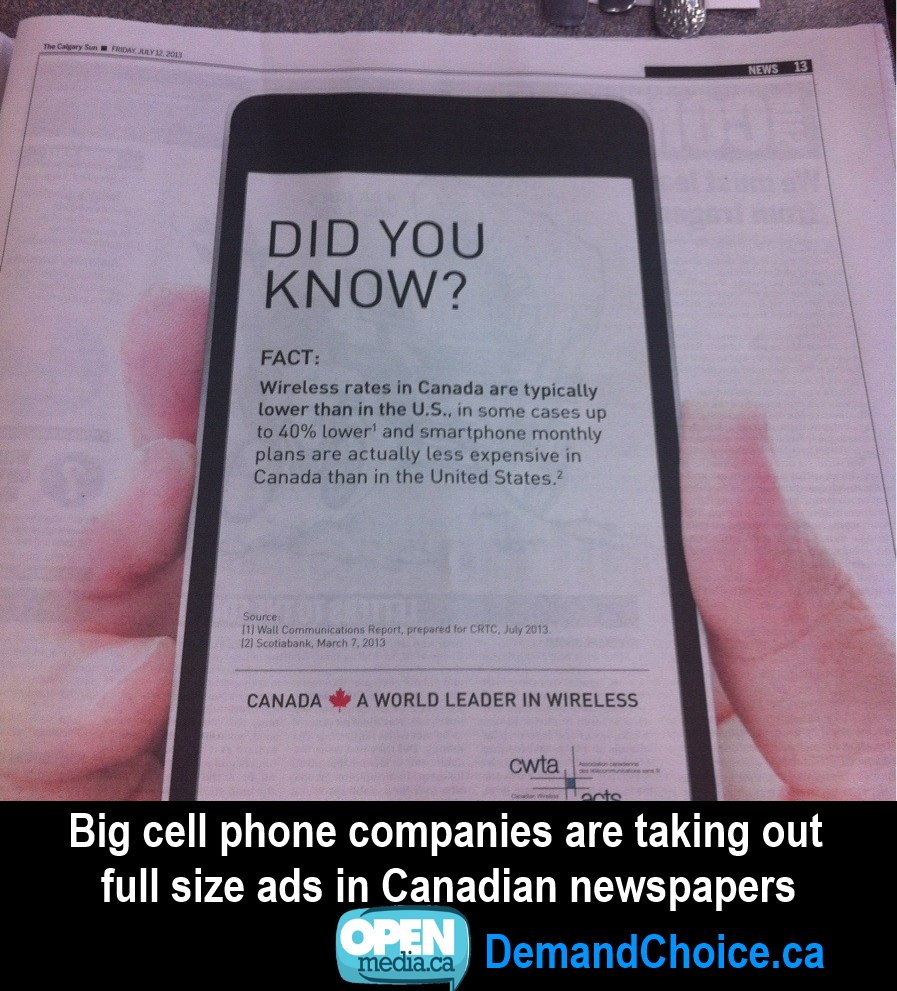 How Canadians are using the Internet to debunk Big Telecom Spin

Big Telecom is up to its old tricks again. They’ve invested some of their record profits into an expensive PR campaign, including misleading full page newspaper ads, in a clear effort to try to convince Canadians that cell phone service is not as bad as we know it is. Earlier this year an OpenMedia.ca study, that included participation by over 3,000 Canadians, found cell phone customers face systemic mistreatment in this country. We even worked with a price-gouged Canadians to put together a toolkit for mistreated cellphone customers. Needless to say, Canadians saw right through this expensive spin and have been actively using the Internet to debunk Big Telecom’s ridiculous claims.

Big Telecom’s ads rely heavily on a recent report on cell phone prices from Wall Communications that was commissioned by the government and the CRTC. Other reports on cell phone prices differ, with the well-respected J.D. Power Report concluding that Canadian cell phone bills rose by 13% in the last year - that’s thirteen times the rate of inflation!

We all know how Big Telecom loves to cherry-pick information. Here’s what you need to know about the Wall Report:

As noted earlier, it's important to put the Wall report in the context of other reports, as it has a track record of rating Canada’s cell phone prices more favourably than others. We’ve already seen how J.D. Power’s report released in May found that Canadian cell phone bills jumped 13% in just the last year.

The gold standard report for comparing wireless carriers around the world is the BofA Merrill Lynch Global Wireless Matrix - this showed that Canadian carriers make more revenue off cell phone users than carriers in any other country in the world - 16% more than the U.S., 32% more than the industrialized world average, and 76% more than in Europe. That means that while the cost of providing communications services is dropping and some of those savings are being passed on to customers - Canadians are being price-gouged more than our global counterparts - as those who have done some travelling abroad will attest.

Big Telecom’s cherry-picking and spin is ridiculous - but it’s great to see how Canadian Internet users are fighting back:

Big Telecom’s spin may be totally ineffective - but advertising campaigns like this don’t come cheap. Canadians will be asking why the Big Three don’t put that money instead towards addressing their systematic mistreatment of cell phone users.

Again and again, we see Big Telecom’s sense of entitlement revealed. Instead of addressing their high prices, mistreatment of customers, and outdated service model, they keep trying to pull the wool over the eyes of hard-pressed Canadians who pay some of the highest prices for some of the worst cell phone service in the world.

It’s time for change. We need clear action from the government to open up our communications networks to all Canadians and new service providers. This is the only way to move beyond Big Telecom’s old-fashioned high-cost model towards an open, 21st century model with lower prices and improved choice.

Canadians have laid out a clear roadmap forward - send this roadmap to your MP and say it’s time for action. Canada has been lagging behind for long enough.