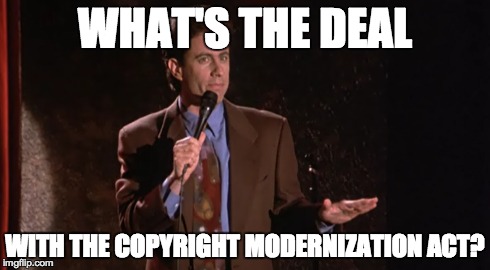 You may have noticed in the past few days there have been some dramatic headlines about changing copyright laws in Canada.  But what - if anything - has really changed for Internet users? Practically nothing. First: a brief overview of a little-known piece of legislation called the Copyright Modernization Act, or Bill C-11.

Passed in June of 2012, this law is the first update to the Copyright Act since 1997, and was subject to fierce debate at the time of its introduction in the House of Commons.  In large part, the bill was criticized for its digital lock provisions, which make it illegal to break a digital lock, including for personal use (a common example of this “infringing behaviour” would be purchasing a CD, and breaking a lock in order to upload it to your iPod).

Aside from this outstanding issue, however, the Copyright Modernization Act has been widely recognized as a measured approach, putting into place fair rules for users that help to balance our approach to copyright in Canada.

Importantly, the amendment expanded the scope of fair dealing provisions - exceptions that allow for individuals to use copyrighted works for parody, satire and educational purposes.  It also opens the door to the re-use and remixing of copyrighted works by creators, as long as no digital locks are broken.

Another very recent update to the act was the requirement that we revisit and review our copyright laws every five years.

But perhaps the most important parts of the bill are the notice-and-notice provisions.

Notice-and-notice is a system that requires your ISP to pass along notices of alleged copyright infringement from rights holders. It’s the last part of the Copyright Modernization Act to kick in, and is in effect the only difference that Internet users will notice between last week and this one.

As of Friday last week, Internet Service Providers and third-party content aggregators are now legally required to pass along notices of alleged infringement from copyright holders.

Michael Geist explains in greater detail in his blog this past week:

“Under the notice-and-notice system, copyright owners are entitled to send infringement notices to Internet providers, who are legally required to forward the notifications to their subscribers. The notices must include details on the sender, the copyright works and the alleged infringement. If the Internet provider fails to forward the notification, it must explain why or face the prospect of damages that run as high as $10,000. Internet providers must also retain information on the subscriber for six months (or 12 months if court proceedings are launched).”

The legislation - which is the same law you’ve been living with for the past two years - keeps the same reasonable caps on the damages that can be sought for non-commercial infringement of copyrighted material, maxing out at $5000.

This is a huge win for Canadians, especially when we consider that those south of the border often face aggressive behaviour by copyright trolls, who send notices directly to alleged infringers, encouraging individuals to settle out of court for obscene sums.

In effect, last Friday’s copyright changes have largely served to formalize a voluntary practice that was already in place since the law was passed in 2012.  Many large ISPs have been complying with notice-and-notice for years, and have noted the system’seffectiveness at curbing infringing behaviour.

Another advantage of the made-in-Canada solution is that the notices do not constitute any legal penalties in and of themselves, but are instead designed to serve as an education tool for Internet users.

ISPs do not have the right to pass along personal information connected to the IP address where the notice was sent, meaning that copyright holders are still required to obtain a warrant for this information before pursuing a case against an individual or group.

On this point, it is also important to remember that previous cases in Canadian law have seen judges rule that an IP address is not a person.  (See this TorrentFreak article about the 2011 precedence-setting case here.)

So what should we be watching for?

First, the Trans-Pacific Partnership (TPP), which was identified years ago as an avenue through which U.S. media conglomerates could lobby to have balanced Canadian laws rolled back and replaced with an American-style regime.

(We’ve been fighting against Internet censorship in the TPP for over two years now, most recently we hand-delivered our crowdsourced copyright report directly to decision-makers meeting in Washington.)

Second, as Geist notes, there is some concern that smaller, independent ISPs like Teksavvy, and Distributel will be buried under an avalanche of notices, especially considering the legislation does not set out a fee to copyright holders for forwarding the notices.

Finally, there is still some confusion over whether these rules will apply to Virtual Private Networks (VPNs) - networks that mask the IP address of an Internet user.  Some VPN companies have already spoken out, including Canadian-based TunnelBear, and indicated that they are obtaining legal advice on the changes.

In the coming months, we’ll be keeping a close eye on how the implementation of the new notice-and-notice provisions, and if there’s any funny business, you’ll be the first to know.