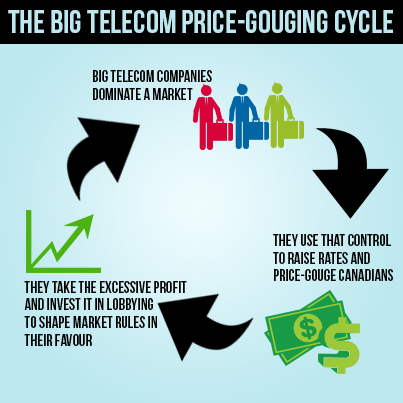 Canadians are worried they'll be stuck with ridiculously-priced cell phone plans, following Rogers' acquisition of indie provider Mobilicity earlier this week.  Don't forget to speak out and tell James Moore to rein in Big Telecom gatekeepers.  Article by Sophia Harris for CBC News  ​Rogers has gobbled up troubled small carrier Mobilicity and the federal government is declaring it a victory for consumers.   Almost two years ago, Ottawa launched a glitzy $9-million ad campaign to let Canadians know it was fighting for their right to cheaper cellphone prices and more choice.  But with rising prices for some plans and now one fewer competitor in the market, critics argue the government is actually losing the battle.  "Canadians may be scratching their heads over why the government just approved a deal that will ultimately mean less choice and higher prices for Canadian cellphone subscribers, despite promises to the contrary," Josh Tabish of telecom critic Open Media said in a statement.

This week, telecom giant Rogers struck a deal to buy cash-strapped Mobilicity, with Industry Canada's approval.
Industry Minister James Moore says the deal "is a win for Canadian consumers" because a chunk of freed-up wireless spectrum will go to another struggling competitor, Wind Mobile, to expand its network.
But Open Media argues the deal also means more control in the hands of Rogers, which, along with the other big three — Telus and Bell — dominate the market.
Read more at CBC News
SHARE ON TWITTER SHARE ON FACEBOOK